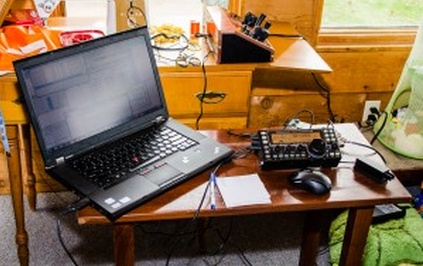 At the last SARA meeting (9/13), Peter, N0GRM, and Steve, KA0OBI, shared their stories about operating QRP portable last summer. This last weekend, when visiting grandchildren near St. Louis, I had a somewhat similar portable experience but with spooks and goblins.

It’s Off to St. Loouie

At the last minute before leaving home, I threw in my Elecraft KX3 rig, a battery, a toolbox, and some cables and wire. I left the KXP100 amp at home. But I couldn’t find my battery charger. Oh well, I’ll wing it. After a long drive, we arrived at tiny Moro, Illinois, 35 miles east of St. Louis.

The next morning, I brought out a balun project that I was building, and together with Jamie, age 9 and our only grandson, we completed the project before lunch. As a side note, Virginia and I have three daughters, and they in turn have 6 girls and one boy. So the score at the present time is: girls 9, boys 1.

My Kingdom For A Power Supply

My son-in-law, Dan, is an avid model railroader, and I thought sure that he would have a battery charger because he has many tools. He didn’t, but he dug up a very old Radio Shack 1.5 amp power supply with plentiful cobwebs and dust. I was uneasy, so I put a meter to see if it had any output. Yes it did, 16 fluctuating volts. The voltage never did settle down, and I wasn’t going to apply 16 volts to the KX3. On to plan C. We do have a plan C, don’t we?

Finally Dan brought up a 20 year old model train transformer, our last chance. It had two what I guess were variostats to control two trains simultaneously. One variostat didn’t work at all, so I worked the knob of the other back and forth and watched the DMM. The voltage was not linear in the slightest, but at the end of the knob travel, the voltage settled to 13.something volts. Voila. I hooked it up to the KX3. No signals, but at least the KX3 was working, and all the grandkids wanted to know how to send their name in Morse code using the side-tone.

Oh, We Need An Antenna?

The “shack” was in the back 3-season sun/play room. The power supply was on the sewing machine table. The code paddles were on the right, the KX3 in the middle, and my laptop was on the left of a small table. I took out some hookup wire, and “measured” it with my arms. 3 feet, 3 feet, etc. until I reached roughly (very roughly) 20 feet. I was near a door so out the wire went, wrapping the antenna wire around a porch light fixture, and on to the frame of a nearby swing set. Use what you have.

The KX3 has a BNC antenna connector. The adapter had a BNC on one end, and red and black banana posts on the other. I connected the “antenna” to the red terminal, and nothing to the black. Signals, sweet CW, filled the room. By this time, the whole family was interested in grandpa’s bizarre project. I tuned around, and when I heard and tuned in a signal, they wanted me to decode it, which I did verbally.

Time To Fire the Beast Up

It was Sunday by this time, and I remembered that the Illinois QSO Party (ILQP) was on that very day. This was pure happenstance. Most CW participants were sending greater than 20 words per minute, so I brought up the KX3 Utility on the laptop which has a terminal function, complete with message memories. I keyed in some QSO Party Messages and saved them. The first memory was, of course, my call. Then a signal report, county (Madison or MADN), etc. I brought up N1MM Logger and set up the IL QSO Party log, in manual mode. I couldn’t hear stations on 20 meters, so 40 meters it was. Then I unleashed a mighty 3 watt contest attack with a 20 foot antenna about 6 feet high.

Anybody Hear Ya, Bunky?

The results were underwhelming. When I called a strong station, others were calling, too. Tuning slightly off the station’s frequency didn’t work either, so I waited until no one was left. A few just couldn’t hear me, but most were worked. I called CQ but got only one answer. I worked 23 stations in 20 unique counties to end up with an earth shattering score of 924 in an hour and a half of operation. Then it was off to the Spooktacular at the local library with pumpkin carving, face painting, and a chili cookoff.  Lord, please don’t let me eat that much chili again. Ever.

The next afternoon, I called CQ on 14.061 where we little guys hang out, and a K7 in Oklahoma came back to me. I could tell from his questions and his fist that he was an experienced operator, and he also was running a KX3. He said that there was a hum, or buzz on my signal. I laughed out loud as I told him that my power supply was an unregulated model train transformer. He replied that this was a first for him, and that I should offer a worked all model train transformers award. Then he asked about my 20′ antenna. Finally, he said that he didn’t understand how he could even hear me. When we finally signed off after a lengthy rag chew, he said he had to tell his buddies about this one.

But I will admit: this is the first – and the last time that I will use a train transformer for a power supply. Wonder if I will get a ticket from an Official Observer (OO).