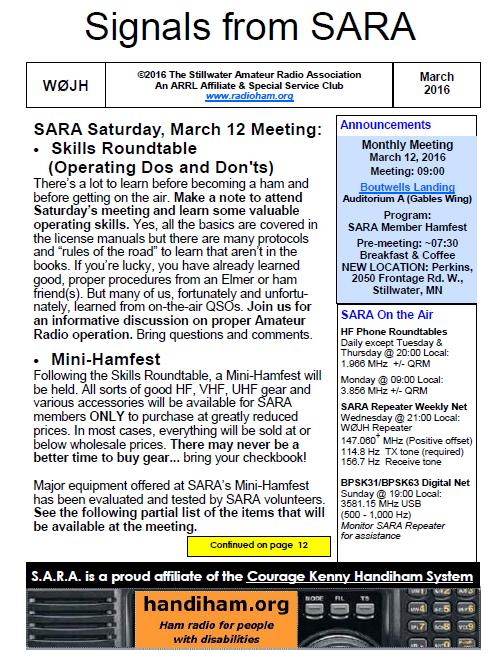 The editoral staff of Signals from SARA has done an amazing job putting together another great newsletter. Every month they manage to pull together articles and stories and pictures to fill 14 or more pages.

The March 2016 issue covers the Skywarn training session held Feb 27 and the beginning of the Technician class and an Extra Class Study Group.

One of our members from far northern reaches of Lake Superior shares information on testing your “cans” or headphones and indirectly your hearing via a web app.

The HELP project is updated with another work day at the storage unit and a trip by the 3 amigos to Eau Claire for the ECARC auction on March 5. In “From the Shack” President KC0OIO outlines upcoming SARA events for the spring and summer months with a New Ham Night; Radios in the Parks; and Field Day.

A recap of the Special Event Ice Station W0JH is the feature of the month. About 800 contacts were logged and nearly 400 QSL certificates have already been sent out. This Special Event is featured on the Amateur Radio Newsline Episode 1999.

The front page as usual details the monthly meeting program. the March 12 meeting will feature a Roundtable discussion on Operating Dos and Don’ts.