January 2017 Signals from SARA has been released! 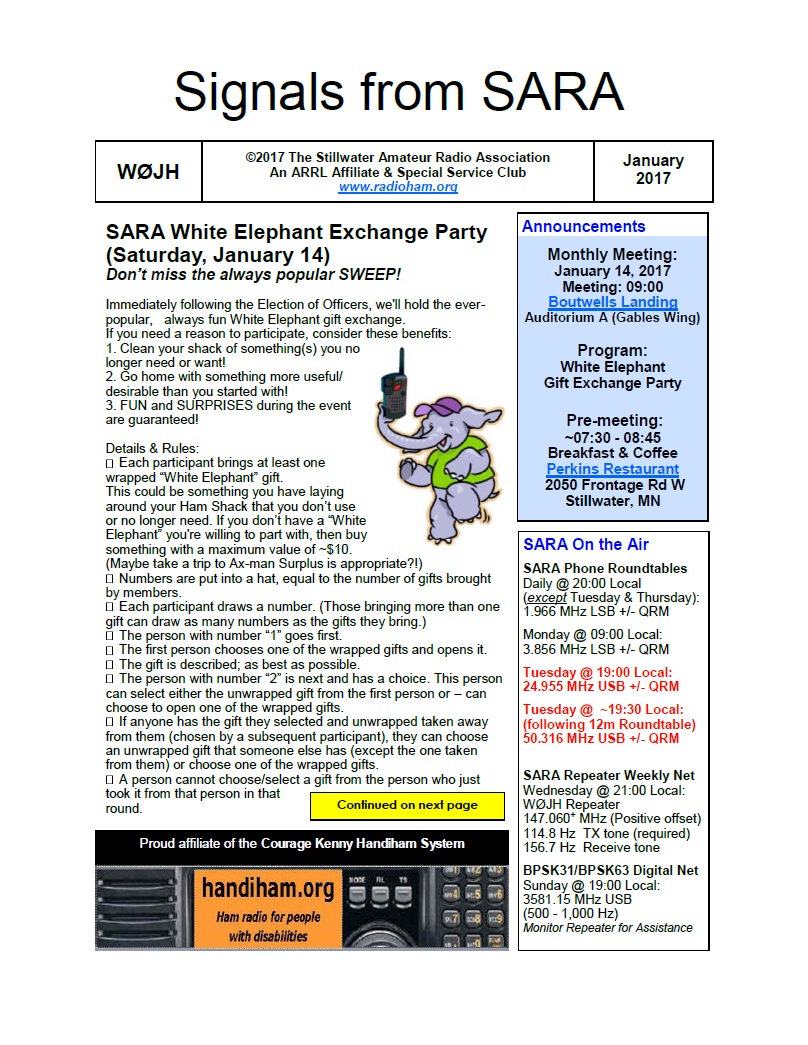 The 1st issue of Signals from SARA in our 25th Anniversary year is waiting to be read! In this issue:

SARA’s White Elephant Exchange Party (SWEEP) follows January SARA Meeting. Some rule changes will make this fun event that much more interesting. Be sure to read up on all the details and plan to be there for a very entertaining event! Will the “flying pig” appear this year?

Annual Election of Officers will be held during the January meeting. Your candidates for the elected offices for 2017 are: President Joe KC0OIO, Vive-President Keith AG0H, Secretary Steve KA0OBI, Treasurer John N5JLZ, and Director (2-yr term) Bill KD0OTB. Nomination for additional candidates for any of these positions will be solicited during the meeting, prior to elections.

President Joe KC0OIO shares some thoughts From the Shack including planning for celebrating SARA 25th Anniversary this year, highlights of the past year, and the meeting Program schedule through May 2017.

Shel N0DRX shares SARA History as he looks back at the beginnings of the Association. “Stillwater Amateur Radio Association” is actually the 5th name of the group. Found out more about the origins of SARA by reading Shel’s “SARA History – The Beginning” in this issue.

Upcoming Skywarn (Saturday Feb 25), Technician Class (starts Thursday March 3), and Extra Class Study Group (also starting March3) are highlights of SARA’s education and training efforts this Spring. All the details can be found on Page 7 of January 2017 Signals from SARA.

Washington County ARES EC John KA0HYR shares some things to consider under the “Prior Proper Planning Prevents Poor Performance” heading. John highlights planning ahead so that preparedness pays dividends should the need arise.

Finally, a reminder that SARA membership dues for 2017 must be paid prior to the beginning of the January 14th meeting to be eligible to vote in the elections to be held at that meeting. As of this writing, SARA has 63 members current for 2017, 55 regular and 8 family or associate members.